Deer Medicine: my Power that Heals


I went for a Shaman's Earthwalk, here in Austria, yesterday. I’d thought that I was just heading out for a walk ‘to clear the cobwebs’, but one sign/animal led to another, and… 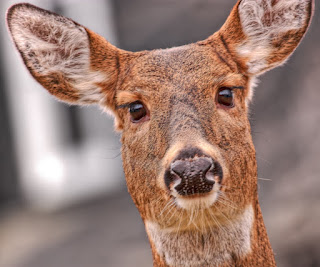 I’d started out on a snowy path that traversed a farmer’s field. A stork flew up and crossed through some woods to the right. It wasn’t the direction I’d planned on going, but I’d been getting signs lately that suggested I think less and go with the flow, so I ‘listened’ and headed in.

I’d been into this small patch of trees (and creek) a few times before. On one of those trips, I’d found the bones of a young deer that I assumed had been shot and left. It wasn’t long before I’d discovered what I’d been sent in to find this time… on the slope ahead of me, it didn’t take much of a guess as to what that dark, motionless mound was… another deer.

I got up close (but I won’t describe the scene). I wondered about the person who’d caused this death. Was it for the sake of ‘sport’, or some farmer’s idea of vigilante conservation? I imagined frustration or powerlessness was closer to the truth. I said prayers, I held space, and then I moved on, ruminating on what action I might take.

I passed by some trees covered with mistletoe. My sister had told me that wherever there was mistletoe, ‘heart healing’ was required (and taking place). I saw crows off to my right, a reminder of how difficult it can be to understand the way that Spirit works to heal, the difference between Spirit’s Laws and the laws – the ‘right and wrong’ – of mankind. Just then, clearly, I heard the message, “just observe”.

“Just observe? You have got to be kidding me!” I knew I had to trust it, but that was a really difficult message to hear. Is this what my lifedream this time around was for, I wondered? And then I heard, faintly, “…for the time being, at least.” (…although I can’t be sure that I didn’t proffer that addendum myself).

Once out of the woods, my tears of frustration wiped and dried, I saw another(?) stork. I followed again, in the direction of another, larger, farther-off woods.

Barely perceptible, an animal that was either a fox or a really small deer ran across a large field towards where I was headed. It didn’t matter that I couldn’t know for sure what it was. Because it appeared in a way that led me to wonder whether it was a fox, I knew it as a message about ‘camouflage’, the idea about whether to stay ‘hidden’ or not. Deer, I take as a message to be gentle with myself (and others – it’s the only way to get to Sacred Mountain). Taken together, I took it as a message not to beat myself up about whether I make a stink about what I’d seen or not.

Once in these (new) woods, I saw a lot of deer. I tried to be careful not to frighten them out of their protective cover. I followed birds and – when there didn’t seem to be other visible signs to guide me – birdsong. I skirted the inside edge of the wood, and crossed a road with a sign warning people entering to keep their dogs on a leash, to prevent them scaring the wildlife. The sign included a picture of an aggressive dog and a terrified rabbit. The message here: refrain from sticking to old loyalties that won’t serve any more – acting aggressively will just rouse people’s fears.

I came upon a ‘crib’ with hay in it, something that had been built for the deer to feed at. I could see two deer at a short distance to my right, a male and a female. They skirted around me, and crossed over the way I’d come. I was given a clear view of the male’s palmate antlers.

…Something New is being birthed, and – as it does with everyone – it starts with ‘Me’. I’m at a place where there’s an opportunity for rebirth, and I need to take a look (back) at what got me this far. The old paradigm of fear/aggression won’t work with where I’m wanting to go, with the New Earth I’ve seen visions of. What we present to ourselves in the outer world is a description of what’s inwardly happening/healing. On a personal level, this walk's message was to be gentle with myself, or else – metaphorically, at least – I’ll be ‘shooting myself in the power’. Over and over again, (for my Self, at least) Gentleness demonstrates itself as the True strength. I don’t believe that I can heal my own heart any other way (and if I’m not healed myself, I’m useless to anyone else). Use my antlers (~ antennae) to receive, and observe the signs (like an other one I got this morning, suggesting that I write). Do the ‘job’ I was designed for, and allow others to play their own parts, to heal their own hearts. Allow them the opportunity to receive the healing they need for themselves, in whatever form that comes. What say you? What’s your ‘power that heals’?