Dying to be Butterfly, totem of Transformation 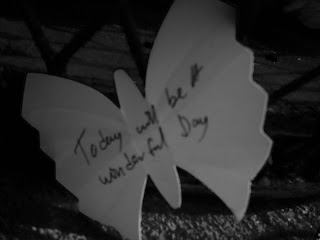 Mother Earth is the centre of my Überverse. I hear her. She sung me back to her womb. She sings Us, and she’s calling us All back, for an (re-)emergence. With our impending birth, though, we need a ‘squeeze’ to stimulate us. I’ve heard it said that, when a butterfly is about to emerge, it’s cells actually produce something that could be described as a cancer. In a way, it makes so much sense; after all, the old body needs to die. It’s the squeeze of the shrinking chrysalis that stimulates Butterfly’s emergence and self-healing. More than the things we’re physically doing to Mother Earth (and to ourselves), I Believe that it’s the Fear of what we’re doing that’s providing the stimulation.

In my last post, I promised Rat that, were I to contract the Black Death/Plague myself, I wouldn’t use drugs. As a gift of Love, he helped me through a maze to the (cheese), this evening. This show of Trust on his part got me thinking about whether or not I ought now to be afraid of why I have these increasing pains in my belly. I went to my fear to Surrender, and realized that what was actually causing me fear was the idea that I might be in greater pain later. Having Cancer is not a part of my Dream. Pain or no pain… no drugs!

If Butterfly doesn’t want to be eaten, is it best to emerge stimulated by the Light, or by the Darkness? In the light, Angel Bird ‘eats’ her; in the Darkness, Bat does. Either way, Butterfly gets crapped out, to be compost for the Earth.

To be Butterfly, what kind of stimulation does Your spirit need? If it isn’t Love/Light, it’s Fear/Black. For those in your lifedream who choose not to move on to Full consciousness, it’s not that they’re doing anything ‘wrong’; it’s just that they’re counterbalancing your awareness with non-awareness – you are yet the Master, and so are they. In the Song of the Überverse, Black is (just) a different frequency. As compared to Light, Black is the silence, the Great Mystery. You can’t hear a song without the silent parts. It seems that there’s no light in the dark, yet black is not a void. It’s a vacuum. It absorbs all. It contains all the colours of the rainbow. In the union of Mother and Father, both Light and Dark are sung.

In my lifedream, Dragons provide the power for rebirth. The one who appeared to help me most recently was Black Dragon, with white studs around his eyes. For me, this is the Dragon of my own shadow, Fear. I was looking for the Light outside of my self, but not seeing it, not realizing that it is me. Black Dragon is my carbon, ready to be squeezed (I’ll talk about ‘ignition’ later, I’m sure). I needed to look at myself, instead of looking outside for people whose shadow powers I could help them illicit. I Know that I came here to transmute the Blackness, the Plague as part of my emergence. But to do that, I have to Know fear (to ‘Own my own’, as it were), so that I can illuminate within my person-hood what it is, what it’s frequency is.

Nightmare come true, I’d recently experienced the most frightening days of my entire existence. I realized though, that I wasn’t scared of what was inside/outside of my self, but that people wouldn’t see the Love that is within Me. I wanted so much to express it for their benefit, but to them, I just looked like shadow. I wasn’t a cross, but a scarecrow. My catharsis came – as it Always does – with my Surrender. Through awareness of feeling the gift of my own Guilt, I had the epiphany that I actually wasn’t as worried about what the people in my neighbourhood thought of me and my behavior, but that I was more concerned about the fact that I might be frightening them. That doesn’t feel Good. Apparently, not everyone is comfortable with the story about the shaman running up the street naked at God-knows-what-time (thankfully, my angels saw to it that no one actually noticed. Ha!).

Butterfly is about transformation, but it’s also (hugely) about courage, the courage to go into your own darkness. For the fact that we saw nothing when we were in our mothers’ wombs, it makes no sense that we’re scared of what’s in shadows. From what my Body remembers, it was a truly Divine place to be.

Great Mother is being reborn, as are we, as are you, as am I. I believe she’s pulling Our fear into herself as the ‘cancer’ for Her transformation. She’s pulling us into resonance with what we’re giving her by manifesting scenarios based on our energetic dreams that give her the squeeze She needs, while at the same time, helping Her to squeeze Us. The only way to be Re born is to go into her centre. The only way to go into her centre is through darkness. It isn’t Black at her core; it’s where her Diamond Body is. Go through your own darkness to find yours, and Light it up. Gaia needs YOU (your illumination). I’ve been polishing my own facets, with every manner of resistance, realizing over and over again that I don’t even have to try… it’s an entirely natural process of just being my self. Yes, it really is just that simple.

Recently, I’d wanted to beat myself up for something ‘stupid’ I’d done. I’d burned something onto the stovetop that she’d just cleaned, and thought my sister would be angry. I considered hiding it, covering it up with a pot, even outright Lying about it. I ‘manned up’, allowed myself to Be with the fact that there must have been a good reason why it was that Spirit had guided me to do that. When I confessed, my sister had been distracted with her own ‘snafu’ (~ “Situation Normal, All F****d Up”). In helping her to solve it, it was revealed that the tool I needed was exactly adjacent to the spot where the tool I knew she needed was. I’d put my hand in there how many times. Did I actually not know it was there?

My ‘stupidity’ revealed to me what an angel I know my sister to be. Noone in the Überverse exhibited more perfect faults for her at that moment than I.

Now, contrary to what my fears tell me, I Believe I’m a Genius. Actually, I don’t just believe it, I Know it. We don’t all come here to be Stephen Hawking. We do, however, ALL come here to learn about Love. THIS is ‘where it’s at’. This little beauty is Home, the centre of the Überverse. Oh, I know that’s contrary to what (someone else’s) science might want you to believe. And I won’t tell you what to do. I can only try to communicate what works for me: get past the fear by Owning it, and see what emerges. It’s going to be dark, and it’s going to be a squeeze, yes, but it’s going to be healing – the more difficult the surrender, the brighter the Diamond Light.

Stephen, I think I’m ready for that conversation I’ve been fearing. I’m not scared that I’m not as smart as you any more (yet I Feel that you’re infinitely smarter than you yourself know).

Giving up my resistance, the light that illuminates my facets is indeed, just a little brighter.

When you Know who YOU are, please share your story. It’s time for a new Book.