A couple of weeks ago, I was Nudged to do a portrait with the intention of assisting in the search for a missing child. As a component of bringing it into awareness, I’m presenting some of the information that was revealed in it here (/below). Firstly, though, I’ll offer this WARNING: you might find the information that follows disturbing (I did). Consider whether it’s your own Higher Guidance telling you to continue, or just curiosity (in which case, please, don’t read any further).

In the interest of protecting the family, I’m not to supply the given name of the person(s) involved. I trust that Spirit has the implications of that all worked out.

There’s a lot more that can be said about the information that’s revealed in the drawing. There’s more that can be drawn as well, but this is as much as I’m being guided to present (at this time, anyway).

If something in this description brings information to mind that you feel is pertinent and would be helpful to this (or another) abduction, please contact the appropriate authorities (i.e. not me). Mind you, if something else has fallen into place that you’d like my help with, then don’t hesitate to connect.

(To enable viewing the photo and the details about it simultaneously, I suggest opening the photo in a second tab, rather than scrolling.) 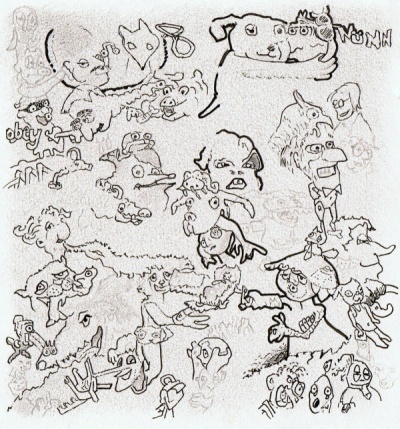 To open, I’ll direct your attention to the two characters in the top-right corner, the Dog and a Bear. At this point, I won’t go into a lot of detail about them, other than to say that as a totem, Dog carries the medicine of ‘compassionate service to humankind’. In this case, it’s representative of the authorities (/police and such) working on the case. In the larger sense, I’m sure it could be said that it includes all the kind-hearted individuals lending their compassionate service, members of the public included. The Bear with the ‘peace’ symbol of two feathers on its head references a person who facilitates connection to the Dreamtime and the shamanic tradition of accessing it for information. The instrument that the dog is holding at the bear’s ear is at once a magnifying glass (~ an instrument used for inspecting clues), a listening device (~ to access what the bear ‘hears’ as information), and a set of eyeglasses (~ self-explanatory, I suppose).

The way the dog and bear are depicted makes it appear as though they’re having a bit of a ‘love-in’ (or perhaps that’s just my idealism creeping in). Fun aside, the message is that by working /being together, ‘their noses will get them to the same place’.

The child being sought is represented by the head of a young girl, below and (slightly) left of the bear and dog. As much as I’d rather not say this, I interpret this image of her (as it relates to and is informed by other elements in the picture) as indication this is a ‘recovery’ operation, rather than a ‘rescue’. That be what it is, I’m just going to (breathe for a moment, and) go on from there. Her lips are outlined darkly. While in one aspect it’s a reference to her person /body having been put under water, I believe it also describes a dark lipstick that was applied to them.

Although I’m to mention it, I’m not aware of the significance of the detail of the inside of her eyelid: her left eyelid is portrayed as though lifted by a (future) hand not shown, revealing three horizontal lines on its underside.

Just below and to the left of this image are depictions of a doll. One of them is in a dog’s mouth …the family dog? I don’t think that’s quite right. I believe it may have (more) to do with the young girl’s abduction. Interestingly, the dog’s ears are depicted in the same manner as the (more vaguely drawn) image of the upset young girl to the right of it. She’s trying to bring someone’s (~ her mother’s) attention (the figure with the bird’s head on her own) to what the dog is doing, imploring her (/others) to come and do something about it. She’s really angry /upset by it, so much so that she’s showing (gnashing) teeth on her lower jaw. Whether or not this was an action that took place in her physical life is irrelevant; it’s depicted this way to show what’s happened /happening in spirit.

Towards the bottom right corner is a ‘whistling’ woman, (which other details in the portrait tell me is) mother to the young girl’s abductor. For all I know, she may indeed be prone to whistling, but the attitude of her lips is more a reference to a specific physical trait. Incidentally, I’m to mention that this woman has some (obviously serious) past life karma, in connection to the abducted girl’s mother.

Her son (the young girl’s abductor) is shown in the part (/broken) circle towards the top-left corner, as the man with the coyote. On a humanitarian note, there are images to the left of him describing the influences upon him, what it is that motivates him to act the way he does /did. That said, those aren’t details I’m going to look into (at this time).

As referred to in the description of his mom (sister? …no; mom), the man’s lips are very distinctive. While the upper lip is pretty much totally hidden by his wiry black moustache, the lower one is so full that it appears as though in an upturned, perpetual (‘intentional’) pout. He has a brown complexion, and his skin tone appears somewhat ‘dirty’ – even when freshly shaven, he appears to have ‘shadow’-dark spots of stubble. As concerns the look to his eyes, he’s depicted – representationally – looking to the right, as though disinterested, though he’s not, as his left eye is taking in things linked /related to his ‘Coyote trick’ (clarification follows). Although it isn’t (yet?) drawn in (fully), this man has a substantial ‘mass’ of hair. It’s black (with a greyish shine /tinge), very thick, and mounds up quite high on his head, like a rounded traffic cone (though more squat). He wears something in his hair above his forehead that – while I’m very curious about it myself – I’m apparently not to further clarify at this point (incidentally, it’s not sunglasses).

Coyote medicine references personal (self-defeating) tricks that you play over and over, thinking yourself clever. You do them feeling as though they’ll get you what you want, but you’re inevitably left unsatisfied. In my shamanic healing practice, depictions of Coyote often reference demonic presences /entities, attached to and attempting to exert influence upon their ‘host’.

The image of the coyote is in one instance symbolic of the man’s ‘trick’, but is nudging me towards it also being a link to a (specific) dog, for the fact that it’s eyes seem to identify it as a female. Further to that note, there’s a length of material to the right in the shape of a figure eight. If you’re on the same train of thought I am, it’s a leash. Following it from where it starts /touches the edge of the man/ dog/coyote circle, the other end of it – where it comes back around to touch the centre of the ‘eight’ – looks kind of like a heart and has a (very) short split in it. I think you can put that symbolism together for yourself.

I believe that’s all I’m ‘supposed’ to say here, to this point, at least.

I trust that Spirit has nudged me to present this information as necessary; God/dess’ Will be done. (Perhaps it’s just my own ego interfering, but…) personally, I hope that what I’ve been guided to present here is a means of inspiring respectful collaboration and healing for all concerned.

p.s. (especially) if you're an artist with an interest in healing, I wholeheartedly believe that I can teach you how to do psychic drawing likes this yourself, whether you feel you have psychic abilities or not - I have absolutely no doubt that you're capable.

And if you did go against your ‘better judgment’, read anyway and found yourself feeling disturbed, then please, don’t suppress what you feel; beat into a pillow, go to a safe place and scream it out, or find some other (functional) way of releasing it, until you feel that your energy is circulating freely again. Don’t allow it to manifest as a catastrophe.