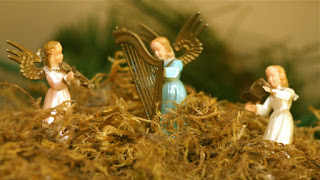 As regards manifestation, what’s a miracle, anyway? And why doesn’t it appear that synchronicities and the like happen every single moment?

I mean, I have no doubt that miracles exist. Whenever I do a psychic portrait for someone I’ve never met, for instance, and something shows up in it like a clearly recognizable visage of the subject’s husband, or an image of a tattoo a guy has that others don’t normally get to see, I can’t help but appreciate it as such. Minute textures that were created when the paper itself was being formed, subtle variations in the pressure exerted by pencil on paper as I prepared the background, even a rare occurrence like a cat ‘accidentally’ walking across the drawing’s surface; these are just some of an unimaginable number of influences that come together to cause the images to appear in what I can only describe as a phenomenal way.

With faith in this kind of ‘magic’ well in hand, I’ve been pondering it in connection to the issue of knowing yourself as an infinite being (intimately connected to all the other ‘starstuff ‘ in the Überverse), yet feeling repeatedly frustrated over attempts at manifestation.

It’s not as if I haven’t put in enough effort, faith, resonant emotion, what-have-you, etc, etc. I don’t believe anyone on the planet could tell me much about the how-to’s of manifestation that I don’t already know. And I’m aware enough not to accept any misplaced self-blame by saying ‘I’m doing it wrong’. Yet in the area of monetary means in particular, I’ve continually found my lifedream coming up short.

It’s not that I don’t manifest at all, or that I’m getting things in a form that I’m just not recognizing (or, or, or… ). It’s more that it seemed I was in a pattern of manifesting just a trickle of what would help, and always after a (deadline) had passed and I’d broken down in a heap. The ‘heap’ part is past tense (well, let’s say 99% past tense, anyway), as I’ve gotten quite adept at accepting whatever happens, especially once I’d gotten started thinking that perhaps rather than getting what we desire, we receive what our guides and Higher Selves deem most beneficial to our soul’s growth.

A psychic once told me that the theme of my life this time around would be ‘disappointment’. While I don’t doubt that I’ve accrued some past-life karma that required balancing, I don’t believe that can’t be amended in any given moment.

A bit overdramatic, perhaps (after all, it’s not as though I’m living in a concentration camp or anything, this time around), but in my mind, I got to describing this particular aspect of my lifedream as I would a nightmare. And I’d gotten well tired of it. I’m only interested in seeing living it as ‘entertainment’ for so long. While I believe in appreciating your life and its challenges /fears /dramas as you would other things you’d take in (and even pay money for) as entertainment, I came to the simple realisation that this wasn’t entertainment I’d pay to see! So I started changing it.

Our waking life is as our dream life, as it also is the Dreamtime; it’s just that this physical experience takes place in another vibrational dimension, with another level of awareness. Your life is a dream, and ‘miracles’ can happen in it just as they /things happen in your sleeping dreams, spontaneously, unprompted, unexpectedly. Miracles seem to defy conventional wisdom during our waking hours, but in our dreams, they’re accepted as the norm.

What to do when you don’t ‘like’ something about the Dream you’re living, when it feels more like a nightmare, when you feel as though no matter what you try in regards to that significant /bothersome aspect, you’re doomed to a life of inexorable disappointment?

Firstly, I told my guides, angels, my self, my Higher Self and whom /whatever else might need informing that this was just. not. acceptable.

I got to considering what happens in a lucid dream when I turn around to confront something that’s chasing or frightening me. I’ll either direct an “I love you” to it, or at least say “thank you” (…for being there, for the potential of the knowledge /insight it’s providing me, for the ‘thrill’ it’s giving me, whatever). Whenever I have the wherewithal to do that, the thing inevitably diminishes or otherwise changes into something unimposing.

Also, a saying that’s been (stuck) in my mind for a while now is: ‘Love your life, and life will love you’. I started directing “I love you’s” and “thank you’s” to the ‘nightmare’ in my life (out loud or otherwise), and it did begin to diminish.

And then I happened to actually do something…

I’d been thinking for a while now that I’d rather not be subject to Yahoo mail’s version of ‘news’. Again, it’s not ‘entertainment’ that I’d pay to have in my life (not that I’ve been dishing out monies for the service, but I well believe it’s been costing my mind, body and spirit, every time I’m subjected to it), so I took action to change my email host [by the way, if you haven’t had cause to use it yet, my new email address is: blackfeathermedicine(at)gmail.com].

Already, I can say (short of getting into specifics) that my message to the Überverse seems to be working.

And, hey, if you can apply something similar and it works for you, there’s another desire of mine manifested.

All said and done, if you manage to get through the trials of your lifedream – even with the self-blame we seem to inevitably subject ourselves to – and manage to love yourself nonetheless, well, perhaps that’s the best of abundant miracles, right there.


Big Medicine Love to You

post?script: when you have a dream, and you feel that the dream was just your mind’s reaction to something that came into your life the day before, consider for a moment that you Dreamed that (person, place, thing, whatever) into your waking reality before your dream because your dream required it (to move you into your next level of development, for instance). In that light, things manifest before you need them; Miracles do happen every single moment.
Posted by Black Feather (aka David J. Nagy) at 9:48 AM