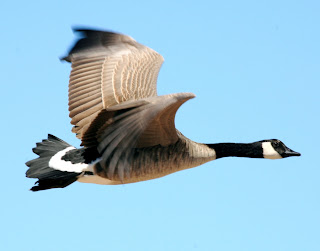 Imagine you’re a flier, a goose. You can soar where you will, wherever your instincts guide you. You’re not fettered by arbitrary boundaries, such as those dividing lines between territories that humankind constructs for political ends. On the other hand, physical boundaries are a bit of an issue. You can likely only thrive (/survive) in locations and climates of a certain temperature, for instance, and – for the fact that you’re not built for mobility there – you’re particulary vulnerable when on the ground (to predators that would love some of your yummy goodness).

Why would you do it? Why set foot on terra firma at all? Well, for one, there’s nourishment there. You can feed while enjoying the security that a body of water affords, sure, but it’s not always an option. Ponds can freeze over, or there just might not be a water body available on the stretch of flyway you’re on at a particular moment.

One of the other times a goose will choose to stay on the ground is when another goose cannot fly itself. It’ll stay there to protect the other, either until it can fly (again), or until it dies.

Because of this self-less attribute, Goose medicine is often described as being symbolic of valour. Many of the people engaged in vocations that help the disadvantaged have Goose medicine: aid workers, philanthropists and people in the medical profession, to name a few. In that light, it’s our tendency to attribute them special status (not that they don’t deserve it). As ever, though, there’s a flipside to viewing the medicine (after all, Goose does fly in both directions, south and north)...

Consider for a second (as difficult as it can be to wrap our heads around) your other manifestation as a flier, as the unhindered being you are aside from the one you now see yourself as, squeezed into your tiny physical form. Why would you have come down to this physical reality? Why would anyone? After all, how much of our lives down here do we spend having to deal with feelings of vulnerability in one form or another? ...emotionally, physically? ...spiritually?

We don’t come down here just to be Goose Valiant, to be the hero (at least, not every time). Instead, we oftentimes put ourselves here in the position of the ‘wounded goose’, in a position of sacrifice as it were.

If you can for a moment imagine yourself ‘flying’ in your pre-incarnation existence: unhindered, infinitely expansive, boundlessly Loving, it isn’t much of a stretch to imagine others in the same light, even other souls whom you perceive as a challenge to you in your present lifedream. Ask yourself why they would have come down here. Why would they have chosen not to remain as they were, without subjecting themselves to the pains and fears that they’re left trying to mitigate (and attempt to pass off to others in the process)? Why subject themselves to the pain that comes from, say, self-loathing, feelings of being unloved and unloveable? Why subject themselves to the pain of abuse that might instigate a hurtful demeanor? In other words, why come down to be the wounded goose? 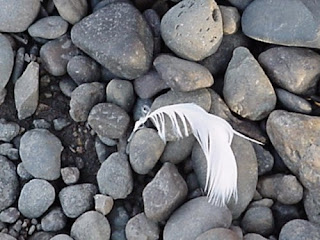 It’s been said that our greatest fear is realisation of our own true power. It may be more to the point to say that – on a soul level, at least – our greatest fear is that others will not realise theirs. Challenges have the potential for great transformation, provided we can go down to where they are. The wounded goose is there to illicit awareness, just as importantly as the hero is there in its role. As when a flock is flying its ‘V’, the weaker geese behind also join in to honk encouragement. Together, they act as a wedge, cutting their way through the air as one unit. All are essential. Everything is happening exactly as it should.

As Goose, you’re not built to physically pick another up; they’ll do that on their own, once the intended healing occurs. Just respect their sacrifice enough to stand vigil for them, and hold their space. And on your ‘return’ flight (when you yourself are the wounded), respect the sacrifice you’re making. Oh, yes; you do, indeed, Love that much.

Big Medicine Love to You