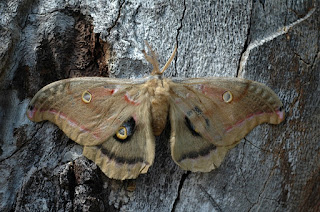 Before venturing out, as I considered enlisting a guide, I noticed a framed (specimen) moth on the way to the door. Hmmm... what would you do with that information? You guessed it; I started heading towards 'the light'...

I'd wanted to go to a woods that I'd seen in the distance when I'd arrived at this new location (in Austria) the previous day, but I picked up on little signs as I was making my way there that suggested otherwise, starting with a white stone in a farmer’s field - in the late-day sun, it looked as though it were glowing against its earthy background. Once I got there, my attention came to a white, round sign fallen down on the other side of a nearby creek (you can bet I took that as a sign. Ha!), and a bird flew by in the direction the creek was flowing from. In the dimming light, I couldn't really see it except for the fact that it had a patch of white feathers that gave it a really bright rump. I looked - and then headed - in the direction it had gone, towards the setting sun (~ the big light!).

I came upon a nativity scene, complete with a guiding star. There was a (plinth) beside it with a double-barred cross on top (sometimes referred to as a patriarchal cross, apparently) and scenes with figures painted on each side. One showed a depiction of Christ with an aura/halo on a similar (double) cross. A dove (with a halo of light as well) flew towards me from below him, and God supported the cross that he was on from above (and - you guessed it - a light encircled his head as well). On the side of the plinth opposite this scene, a figure casually stood on a demon, crushing it underfoot.

As I continued after the sun, a seed (~ thoughts,ideas, beliefs, plans, goals, visions) on its little parachute floated alongside me, suspended in the air. I walked on and on (and on). I started wondering, "Am I really supposed to continue in this direction? What am I doing out here anyway? The sun's almost gone, and I'm not even sure I can find my way back as it is!" I was about to turn on my heel when I saw: a white lighter on the ground in front of me. Well, as far as confirmations go, I figured that was about as specific as a sign could get!

Just ahead, I came upon a carved wooden bear. It held a sign that read “wilkommen holzbau” (‘welcome, wood construction’ ~ a suggestion that something is being built, from your raw potential). It was quite dark now, and in the distance I saw a Christmas light decoration in the shape of pie wedges (like in the game 'Trivial Pursuit' ~ some pieces of information are being brought together at this time that'll bring about a completion of some sort).

I walked past some old apple trees that had the odd shriveled apple on them, past their harvest. I couldn't help but think of how this might relate to the story of Adam and Eve in the Garden of Eden. I believe this sign was suggesting that it's time for a rewrite (or a re-do, anyway!).

Off the side of the road, there was a waterworks structure. Some of the pipes had red (~ passion) accents, and seemed to me to be in the shape of a woman’s (alluring) form. Her outstretched arms gave the impression that she had the same shape as the double cross I'd seen earlier.

I saw a double-steepled church (~ your spiritual beliefs/body) in the distance (on the other side of the valley) that was lit up from the inside. I thought to head towards it as well, but my guidance strongly suggested that - for now, at least - this walk was complete. The clouds parted, and the moon shone through. I got a little disoriented ('lost' is more like it) along the way back, but eventually found my way by following its light like a beacon. 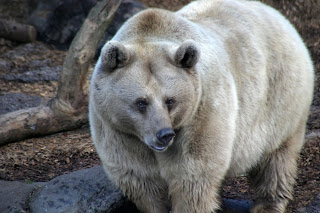 Post-script: I want to mention something about 'Bear' here. Upon first sight, the carved bear had piqued my attention especially because - in healings I've done - I've shared medicine with a lot of people who seem to all be connected to the same bear (energy/clan/constellation?). The sign the bear was holding suggested to me to be aware that - at this time, especially - Spirit is working us into a new form. Bear is symbolic of accessing your untapped potentials through other levels of consciousness, as in the Dreamtime. Even though you may largely feel unaware of it on a conscious level, you are in your own 'healing cave' at this time, preparing for your upcoming springtime.

From what was revealed in this walk, I suggest a couple of specific medicines. One, we're rewriting/re-doing previous versions of what our spiritual beliefs/realities are, on a collective level. Keep in mind that there is no external 'church' to head towards, no point asking someone else for a description of the consciousness that you are coming into through your experience;  head to the light within. And two, your passions - whether devilish or divine - hold a clue to what it is that you're actually wishing to connect to. Again, don't look to some external image in the hopes that you'll be satiated by it. Call upon Bear medicine to show you the reason (and release the need) for those outer projections so that you can know the medicine you're actually after, and then allow that Sacred union to be made manifest!

Big Medicine Love to You