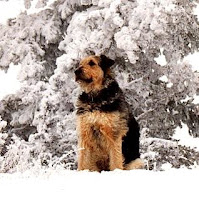 Because dogs have such infinite love-loyalty for their (owners), they keep going back to them, even if abused...

Dogs are much harder to train when you send them thought pictures about what ‘not’ to do; they don’t see/hear the negative part of the command as much as the rest. To them (and sometimes to us), disapproval is better than no attention at all. If (because of their own skewed beliefs about themselves) all a birth-parent has for us is disapproval, we’ll keep doing things to ourselves that will allow us to keep fetching disapproval for them. Just like dogs, we’re returning to them what we think they want. In a sense, we’re winning their approval by continuously fetching and being rewarded by their ongoing disapproval.

Dog has loyalty that has them taking on others’ illnesses. Energetically taking on dis-ease for the pack leader(s) ensures that the entire pack can survive better. Unfortunately, the practice only works as intended if the alpha is True/right Alpha. Goose exhibits a form of loyalty too, but it’s more the loyalty/valour of standing guard while someone heals themselves (or doesn‘t, as is their Free Will) - geese stay with each other if injured until healed or dead. Either way, Goose will eventually rejoin the flock to add his/her draughting abilities to uplift others and honk out encouragement. Remember, though, that a goose will protect that which is worth protecting (they make great watchdogs, by the way).

Aside from the associated energetic and emotional considerations, it doesn’t make evolutionary sense to continue ‘fetching’ for anyone who‘s not carrying right Jaguar medicine (i.e. using their power ethically). Stop carrying their medicine for them (remember, they need it for themselves); be your own alpha! Let them chew on the last stick you gave them so that they can see it for what it is. You know what a slobbery, chewed-up stick looks like; let them decide if it’s what they really want for themselves!

The problem with fetching, too, is that it’s a two-being, domesticated relationship. I can imagine that you have some appreciation for how much more efficient it is to hunt in a pack (and by hunting, I mean `going after a common goal`). Need I say more?

Do you want to fetch sticks, or do you want Rabbit (if you`re a vegetarian, substitutions can be made here)? Until you‘re ready to re-remember what a rabbit actually looks like (and don‘t worry, their criss-cross scent trails are everywhere - your nose will come across one eventually), picture throwing some sticks that have things written on them that you might actually want for yourself! It's the best way to care for the rest of your pack.

If your heart brings to mind a friend(s) who would find this information helpful, send Pigeon medicine (by clicking on the appropriate link below) to carry the message to them!
Posted by Black Feather (aka David J. Nagy) at 3:40 AM