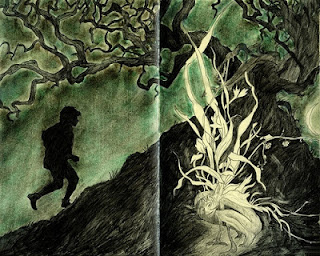 Curiously,I was guided to undertake an Earthwalk as night/darkness was coming on. The theme for it was described by Horse and Beaver. I took this to mean that I’d be presented with signs proffering messages that would give insight related to difficulties using power compassionately, ego getting in the way, blocking the energetic flow that would otherwise help in working in community, for the good of all. Asking for totems to guide me, I was to follow suggestions put forth by Dog and Mouse.

The appearance of Dog immediately brought to mind a dog skull I’d happened upon on a walk a couple days’ previous. This wasn’t the same one I’d seen on the Earthwalk I’d posted previously, but another one. At the time, I thought, “What? Am I destined to come upon dog bones on every walk I take?”  While I realize that so many of us are here on missions of compassionate service, seeing how Dog is sometimes treated really threw my ability to extend myself.


Once I found my way in the rapidly dimming light to this most recent skull, I took out my flashlight, made like Mouse, and started scouring the trail and forest floor for what details I could find. Whiskers to the ground, I couldn’t help but notice a small spot of brown goo that looked like oil. Having given it a sniff, I found out it wasn’t oil, though for the life of me I couldn’t tell what it actually was (thankfully, it wasn’t faeces, either!). The colour brown is a suggestion to become more grounded. For the fact that it had appeared in the form of a fairly fluid substance (as compared to an object with very defined edges/borders/boundaries), it also seemed to be a message to become more a part of the earth and my/our surroundings, in contrast to existing as such an individual/egoic entity.


The flashlight illuminated tiny white fungi that were on the dog skull and over much of the forest floor. I now understood one of the reasons I was guided to do this walk during darkness; this fungus would have been nearly invisible in daylight. The whiteness of the fungi (~ a reference to our “…innocence, surrender, peace, and protection”, and our angelic nature) is something that’s easiest to see in darkness (~ during difficulties, challenges, our ‘dark times’, when it’s difficult to maintain hope). When the sun is shining and all is rosy, our angelic natures are in plain view (that is, the tip of the iceberg is, at least), but not as easy to recognize or appreciate, without contrast. The difficulties we’re presently experiencing help facilitate that (as in the case of coming upon the dead dogs I seem to keep finding).


At the intersection of two gravelly trails, I found a piece of a white plastic banner with a blue dot on it (~ offering clarity) and a ‘Mini’ logo on it with wings ~ “…a desire for freedom, abandon, glory, self-expression and to take flight from the confines of your earthbound life that you may feel a closer connection to God/Goddess/Spirit”. It had been part of a piece of flagging that someone had used to mark a rally route. In one direction, a path climbed steeply upwards. I followed it (taking the earlier appearance of the wings image as a message to indicate – among other things – attaining some height).


I stopped when I felt I was in ‘the right spot’. My flashlight on for a moment, I found myself looking directly at an incredibly vivid shadow of a butterfly, an effect of the torch casting its spotlight on a lone patch of leaves directly in front of it. I was awestruck by the perfection of the image/experience, and sat down to meditate on it.


Now in the dark, I heard owls in the distance. Wondering about what they might be hunting, I tried to be Mouse – in accord with the ‘Mini’ sign, I thought myself small. Although I didn’t otherwise hear or see anything, (my perception of) what light there was suddenly went visibly darker, twice. Not knowing what to make of that, I (later) pulled a Path of the Soul card for some insight. It talked about friends and loved ones who’ve crossed over wanting me to know that they are with us. In hindsight, it made perfect sense, Owl being (among other things), the go-between to the Underworld.


I got to thinking about the signs I’d been presented and the suggestion of ‘making myself small(/Mini)’; in other words, lessening my ego and loosening my boundaries. I recollected a shamanic death experience during which I’d taken on a demonic energy (for ‘transport’, to deal with at a later time). I couldn’t ever see myself doing that again, but why not take on the alternative, I wondered? (…and then, “Why didn’t I think of it before?”). I opened my arms to welcome in a ‘good’ earth energy, with the intent that it be an energetic entity that’s working towards the healing of the planet. At that moment, the wind picked up. I saw a short, white, ghost-like figure running through the forest in my peripheral vision. Guidance describes it as an Earth Angel.


I don’t know what I was expecting, but I can’t say that I necessarily felt any ‘different’ in the moment. But then, in the case of my realization with the demonic presence earlier, I only became vividly aware of its presence after some time had passed (‘evicted’ since, thank you very much!). As confirmation, on my way out of the woods, I peered through a window frame into the ruins of an abandoned house and caught a brief impression of the movements of a bird that I’d startled with my light. I couldn’t see it directly, but it was definitely in there.


As ever, a Shamanic Earthwalk is a Shared Earthwalk. For those of you finding it challenging to stay your path at this time, Earth is putting this forth as a message for you to call in an Earth Angel (as compared to calling on one). It may be subtle at first, but you’ll find yourself experiencing greater clarity, feeling renewed, and with a deeper understanding of your purpose here on Earth.
Big Medicine Love to You,

Italic text in quotations are taken from “I Had TheStrangest Dream: the Dreamer’s Dictionary for the 21st Century” by Kelly Sullivan-Walden.
Posted by Black Feather (aka David J. Nagy) at 9:59 PM