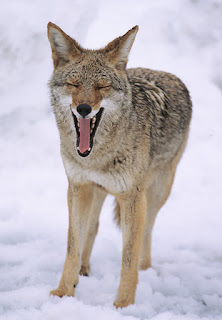 What’s your Coyote trick that you pull on yourself? Yah, no… pretty much everyone does have one. It’s a thing that you do to get what you want that doesn’t actually get you that whatever-it-is-you‘re-after, except that the doing of it seems like such the right-smart, clever thing to do, that maybe you don’t even notice that you’re not ever getting it.


A better question, perhaps: what’s beneath your Coyote trick? Or, in other words, is there something added onto your motivation that’s different than what it is you think it is you’re after?


For instance, my Coyote trick is Turkey with contrary Fox, coupled with Moose and contrary Weasel. In translation, when it comes to animal medicines and healing, I have a difficult time just helping people. Don’t get me wrong - I absolutely Love what I do. I consider every opportunity to share medicines a total privilege, a Blessing. (If I’m honest with myself though,) my trick is that I often act on a subconscious push to make myself visible and prove my power. As a result of the karma I exposed myself to early in my present lifedream, I often find myself chasing recognition as a way of boosting my self-esteem, rather than just standing in my medicine, following my soul’s mission, and allowing opportunities for healing to come when and as they do (and they always do. After all, I’m really good at what I do! Oops… damned Coyote!).


Not being aware of your Coyote really is like chasing your tail (seems like a silly thing to do, but some dogs just love it, don’t they). You get caught in loop after loop after loop, after… it can distract you from fulfilling your lifedream mission, keep you from effectively using your abilities. For the fact that your abilities in their right medicine can be of such an immense benefit to others, it’s ‘the Dark Ones’ (for lack of a better term) way of trying to pick Great Spirit’s pockets, of ‘reducing the harvest‘, as it were. How many people are missing out for the fact that they’re avoiding - not ‘you’ necessarily, but - your Coyote’s trick, rather than engaging with your Divinely-gifted medicines?


Not only that, but the frustration of chasing your tail can have its consequences. Let’s say, for instance, that a reading or vision quest reveals what your Coyote trick is, and that it typically puts you in situations where you’re ripe for feeling overpowered or overwhelmed by others (described as imbalanced Horse medicine). In similar fashion to how Louise Hay describes metaphysical reasons for physical ailments, these kinds of contrary experiences might manifest as digestive issues. In and of itself, unbalanced Coyote medicine (~ falling under the influence of a scam artist, a disregard for causality, or not being able to laugh at your own folly, especially) can manifest as diabetes.


So, what’s your Coyote trick on yourself? Our own tricks on ourselves can be laughable, but besides having a good chuckle, how can you balance the medicine?
Meditate on it, ask your guides, use Medicine Cards, or ask your friends (unless putting others’ opinions over you own inner knowing is your particular trick. lol). Some starter questions you might want to investigate:


If you feel as though it would help you to ‘cut (to) the chase‘, I’d be more than delighted to assist you myself (with my Coyote in the back seat - he‘s definitely worth keeping around for his entertainment value!).
Big Medicine Love to You
~ Black Feather
Posted by Black Feather (aka David J. Nagy) at 9:56 PM