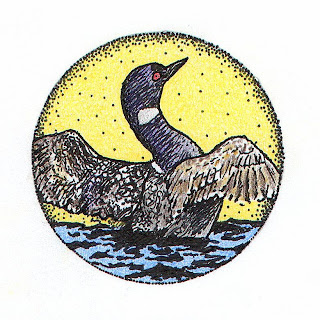 Because it’s natural that we do it that way ourselves, we assume that Loon takes an in-breath before diving. Her bones are actually denser than most flying birds, and while this makes her less buoyant and allows her to submerge easier, she actually breathes as much air out as she can before going under, enabling her to dive even faster, deeper.
You need only look at the fact that our breathing slows when we‘re dreaming during sleep to recognize the potential of Loon‘s medicine of breath restriction for accessing other levels of consciousness while awake. She’s a huge proponent of maintaining conscious control - remaining lucid - while doing so, in pursuit of information that will nourish you.
Just as the white dots on Loon’s back are a reflection of the stars, the other states of consciousness she renders accessible open the lines of communication to other worlds and dimensions. While the symbiotic relationship between her physical body and the way she uses her breath teaches us how to coordinate our own in such a way as to enable us to access the astral plane, dreams and other levels of consciousness, it also makes it possible for our guides, angels and spirit helpers in the Dreamtime to access and inform us.
The other day, a friend told me a story in which a pregnant cat had accidentally gotten locked in a neighbour’s backyard shed. She’d given birth while she was in there and didn’t get let out until days later, thoroughly dehydrated and terribly emaciated. Her kittens didn’t survive. That night, I dreamt a version of the story in which I was explaining to someone that - in a previous life - I’d been the man who’d locked the cat in the shed, and that I’d actually been aware of doing so.
What would be the intended purpose of such a dream? It didn’t seem to be as simple as (just) integrating that days events. The guidance I received about it suggested that it was about ‘acceptance concerning others’. While I’d been assured by my friend that the shut-in incident had, indeed, been accidental, the idea that it might actually have been intentional had crossed my mind, if only for a brief moment. When something so seemingly ‘unfair’ happens, it’s a natural inclination to find something or someone to blame - it‘s an anger borne out of feelings of helplessness. Mind you, if you were to extrapolate that inclination, it doesn’t exactly bode well for us as a humane race. Imagine, for instance, how things might play out if the feelings induced by the scenario I just described had been allowed to fester (unchecked); automatic distrust, judgement and anger don’t exactly jive with a world vision of harmonious co-existence. I understood this dream-version to be my spirit guides’ way of maintaining a sense of compassion for others, even in the face of something I’d describe as a ‘heinous’ event, and of helping me to outgrow reactions based on a paradigm that doesn‘t serve intentions for a new earth. By putting me in the position of the perpetrator, I’m reminded that I haven’t been blameless myself, given events in my previous lives (or in this one). Whether it’s of others or of self, no healing can occur without compassion.
Because we do have free will, of course, our spiritual support team will only interject in this way based on our intentions. But in doing so, they influence our mindset in accord with those intentions, thus shapeshifting us and allowing for change in our lifedream’s trajectory. Trusting in them and their input will lead you into more readily trusting yourself. They’re especially good at helping you to get out of your own way, and giving you alternative experiences to learn from, as through your dreams, for instance. Consider that your dreams are the Divine’s dreams. They’re Spirit’s way of helping you to see yourself and others through your angel’s eyes: All (as in ‘all parts of you’) are equally deserving. This is the conscious intention of Loon’s medicine, to increase your awareness by diving within, accessing other dimensions of your Universal self, other realities, and gleaning the wisdom from events that you wouldn’t otherwise experience in your waking, ‘ordinary‘ lifedream.
Posted by Black Feather (aka David J. Nagy) at 2:10 PM