Shadowbunnies / Help for the Fearful 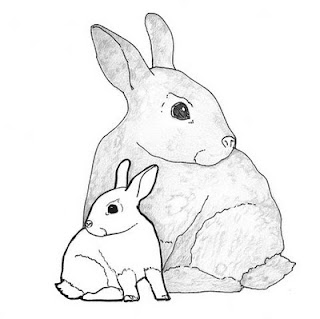 Have you been nervous as Rabbit lately? Every time I pull the animal medicine ‘Rabbit’ for someone (or ‘Mouse’, for that matter), fear is an issue. You know, that feeling of worms in your stomach, that pressure on your head… I’m sure I don’t need to go on; however it manifests for you personally, I’m sure you can identify.

Rabbit comes to teach us though, that fear is just energy, and our experience of it is most often a perversion.

Through my experiences doing energy work, I’ve developed a real appreciation for the fact that, as spiritual beings, we can energetically feel each other’s pain. Because many people learn to suppress and ignore their own buried ‘stuff‘, the healer will often feel the client’s pains/discomforts/emotions in their own body as a way to identify where their energy is blocked. Of course, this doesn’t just happen between healers and clients, we take other people’s stuff on all the time. Although the healer/client scenario might be an example of the ‘useful’ transfer of these energies, for sensitive/empathic people especially, most of the anxiety we feel at any moment may not be our own (oh, I‘m not arguing how convincing it is, though).

As yet another example of how we ‘carry medicine’ for people, sometimes we take on people’s fears as a subconscious (and misguided) way of keeping them from being harmed or hurt, as a habit we developed in childhood. This can happen if it was in our experience that someone was seriously berated/hurt when something we were attached to was present. If we were happily colouring at the time, for instance, we might have associated that people get hurt whenever we’re creative. Because we‘re such loving spiritual beings, we might try to protect people throughout our later life by disavowing self-initiated creative activities/projects that would otherwise give us joy.  Funny to think that these are some of the things we tuck away in our shadows. Do you see now how there are gifts there? Perhaps you’ll want to give some thought to what you might be denying yourself (and others - everyone could benefit from the gifts you have hidden).

Rather than just go on and on about how we experience fear (perversely or no), I actually intended to reveal more of Rabbit’s ‘flipside’ (there’s always a flipside). The flipside to Rabbits’ fear as a prey animal - what they’ve developed to protect themselves - is their fuzzy cuteness, their large ears, sensitive noses, and - arguably their most valuable feature - their amazing reproductive (pro/creative) capacity! For an animal that’s (symbolically) largely about fear, I’d say those are some really valuable attributes!

Lately, I’ve had a fear of seeing ghosts. With the increase in my intuitive abilities, I get messages from Spirit quite clearly, but (no) thanks to watching Hollywood’s version of spirits as a child, I’ve been backing away from allowing myself to ‘see’ what it was that I was imagining I‘d see. Since meditating on Rabbit, I‘ve come to realize that I’m not scared of what I think I’m scared of (or, I should say, ‘was’ scared of). Since coming into awareness of a past life where I had a lot of power (as many of us have; these memories are held within our cells), but abused it, I realized that what I was actually worried about was how I’d handle the new-found abilities that would accompany more direct communications with spirit(s). And then I saw my first ghost this evening, and it wasn’t at all what I’d expected. It was the ’ghost’ of my wife, who’s away in Edinburgh until I can join her (months?) later. Then it was the ghost of every person I ever tried to deny to myself how much I truly loved (and missed). I’d been Rabbit-scared of having my heart broken open. These are the things we hide in our shadows.

The flipside of Rabbit is courage - the courage to change direction. S/he comes to create fertile ground for new growth and new adventures, to show us how to be productive again. I was trying to turn off my fear, but now I realize that it gave me a squeeze I really needed and wanted. Like a caterpillar coming out of its chrysalis, it’s gotten my juices flowing for my rebirth/flight. Baby carrots and fresh green grass… hmmm… things look pretty good, now that my shadow’s all lit up.

If your heart brings to mind a friend(s) who would find this information helpful, send Pigeon medicine (by clicking on the appropriate link below) to carry the message to them!
Posted by Black Feather (aka David J. Nagy) at 5:50 PM