Who's Holding the Reins? 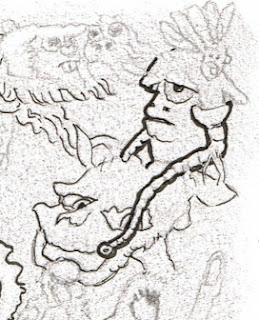 You don’t beat yourself up over things all of your own accord. You wouldn’t wrack yourself with guilt, feel anguish, confusion or remorse, despair, doubtfulness, hopelessness or (blah, blah, blah, blah) all on your own either. You have help. We all do. We have our dark angels for that. And yes, I did just say ‘our’.

Taking a larger view, the world is a bit of a mess, and they’ve helped us get it there. While it seems that they’ve robbed us of our ability to live our lives joyfully and lovingly, they’re actually helping to facilitate it.

Have you noticed that breakthrough follows breakdown, expansion follows restriction, etc? Who hasn't questioned – if there is a God – why S/He would allow ‘bad’ things to happen in the world?

Imagine for a moment being ‘The’ original creator (or call yourself an ‘aspect’ of, or ‘intrinsically connected to’, if you’re more comfortable with that). You’ve broken up aspects of your supreme, omni-Consciousness into infinite little bits of yourself and separated them (‘Not’) from awareness of each other, as a means of expressing the ever-expanding nature that is your creation: Love, of which you are part-and-parcel.

For your creation to ever-expand, you ‘pave the way’ (as it were). For all intents and purposes, you can picture this as your Creation expanding itself into the black nothingness of space. From the blackness, shapes start to differentiate. The blackness becomes individual shadows. For the fact that you are the Source of Love, you could say that these individual (darknesses) are beings that are ‘not Love’. Without them, Love doesn’t get a space to ‘Be’. With them, well, as it follows.

We’re at a point in human evolution where we’ve been under the influence of beings of ‘not Love’, but (I believe) they’ve been helping in the ever-expansion of Loving Creation. There’s no judgement necessary; you could say that they’re just a ‘first differentiation’. They make what we are – as Source – more evident.

Do you ever have those moments of unparalleled lucidity where you realise, ‘Hey, I’m not diminished by externals; I’m not a slave to whatever happens to me from the outside’? Do you notice those moments happening more and more often?

There’ve been dark angels taking advantage of our energies for thousands of years now, but as Source, it’s ‘we’ who actually hold the reins. They wouldn’t exist at all, were it not for the ever-expanding nature of the creative process that is Love. And in truth, they’re becoming aware of that.

Be kinder to yourself. Realise what you are. You’re paving the way, and you’ve got quite the machine to do it with.

Sure, it’s a lot more complicated than that, but it doesn’t have to be.
Posted by Black Feather (aka David J. Nagy) at 10:21 PM