Is “The Pink Elephant” yours? 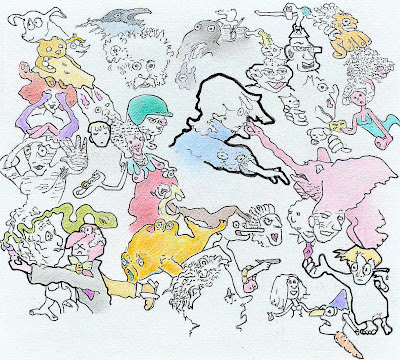 Sometimes I’ll be guided to do a portrait before someone has requested it. For the fact that past, present and future actually occur simultaneously, it happens sometimes. I see it as Spirit’s way of getting me do the work of creating a portrait at a time when I’m not overbusy or otherwise occupied. It’s usually not long thereafter that the intended person shows up. In the most recent instance, during her healing session, a woman mentioned what she remembered as a waking dream to me that she‘d had as a young girl. I connected the dots and realized that a portrait I’d started previously included an illustration specific to the incident. What was revealed eased her mind about something that had puzzled her about the situation ever since, by providing an explanation as to why a certain significant other had responded to her in the way that she had at the time.

That said, this particular intuitive portrait has me a bit puzzled. It’s been occupying a space on my desk for some time now, and it’s ‘owner’ hasn’t shown up yet! (Okay, maybe I’m not as puzzled as I am impatient. Ha!)

So, how’s about I try to mention just enough of the portrait to make it recognizable, without giving away overmuch personal information? Okay? Okay…

The woman drawn in darker outline wearing the light blue turtleneck sweater is the portrait subject. She’s reaching her right hand out towards something that she senses is there but that (I don’t think) she actually sees - it’s represented by the pink elephant. The woman has a surprised look on her face, though, because in return she’s experiencing a physical feeling/response as though something is actually responding by touching her back. I’d describe the woman’s reaction as ‘disconcerting’. She might be worried that people will see her as crazy, but - I assure you - she’s not. As much as exploring the situation might seem really frightening (she‘s certainly worried about getting out of her ‘comfort zone‘), I’m sure that her going over this portrait with me would clarify an immense amount for her. Not to mention that it would bring her into a place of power, as compared to the feelings of fear and weakness she’s likely experiencing now.

To identify things further, I believe that some of the characters above her illustrate something to do with an environmental issue in the family history. I’d describe it as a ‘sore spot’, even. It has to do with a difference between what was acceptable as a fix as far as human-made laws went (thus the appearance of the crow and its reflection in the water), but which you wouldn’t see as acceptable in regard to Higher/Spiritual/Divine law. A manufacturing plant/factory took a measure intended to at least make it appear that it was doing something to clean up its act. It ‘fixed’ the (auto/vehicle?) plant’s toxic output by scaling down the outflow from one (pipe), but actually, mostly just diverted it through the other, and made it less conspicuous by extending that second outflow so that it wasn’t as visible (Mother Nature is not the only one who wasn’t happy about it).

So, if this sounds familiar to you personally, or a close friend has confided in you and you feel that it’s hers, I’d be more than delighted to do what I can to help this particular person out. That be the case, you can contact me via phone or email. Otherwise, if it resonates with you to spread the reach of this message a little further, I (and she, I well imagine) would appreciate you passing it on by sharing it.

If you’d like more information about intuitive portraiture, this site is a little dated, but it’ll give you pretty much all the information you’d need: http://wix.com/intuit/intuitiveportraiture
Posted by Black Feather (aka David J. Nagy) at 4:44 PM